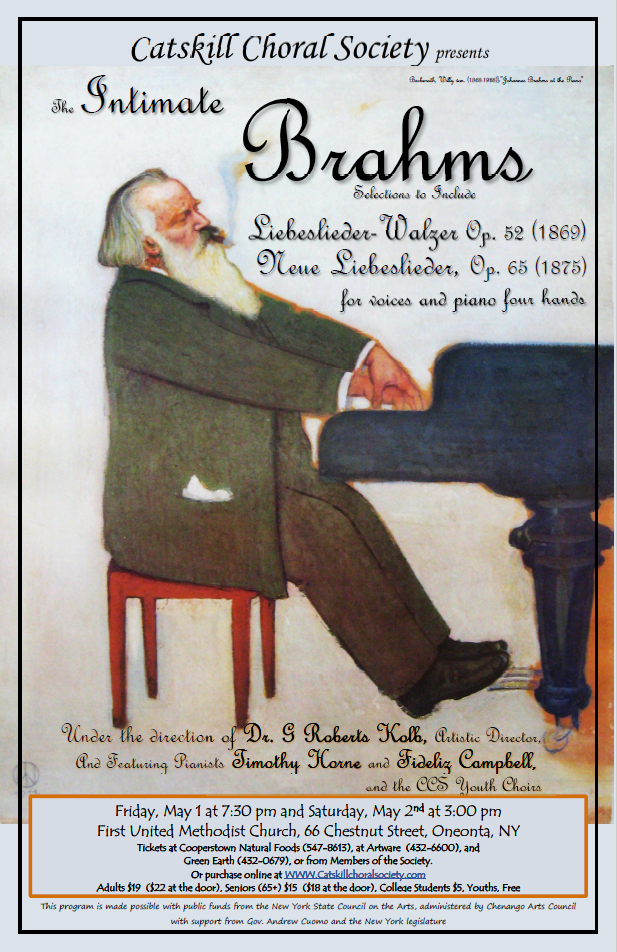 The Catskill Choral Society will be presenting a concert entitled  “The Intimate Brahms” that will focus on his smaller scale music for voices and piano.  Johannes Brahms  perhaps is better known for his large orchestral works (his four symphonies, two piano concertos,  the Academic Festival Overture, and the Tragic Overture) and the monumental Ein deutsches Requiem Op. 45 , which, by the way, will be performed under Dr. Kolb’s direction a week earlier at Hamilton College (https://www.hamilton.edu/news/calendar/calendar-of-events/calendar-event/2058044).  Perhaps the better known of these smaller works are the Liebeslieder Waltzer, a set of 18 short love poems scored for voices and piano four hands. Less well known are the Neue Liebeslieber, completed six years after the first.  Joining accompanist Tim Horne on the bench for these two works will be Fideliz Campbell in her premiere appearance with the Catskill Choral Society. The program will include Sechs Quartette (Op. 112), Drei Quartette (Op. 64) and two selections from Quartette (Op. 92).  Please join us!  May Day will be the perfect time for a little romantic music.

The Catskill Choral Society Youth and Children’s choirs will perform some Brahms, Bach, and others under the direction of Ms. Cynthia Donaldson.

Fideliz Campbell is lecturer, teaching aural skills and keyboard techniques at Hartwick College since 2013. She is Artist in Residence in piano and serves as accompanist for students in vocal and instrumental for convocation, jury and recitals. She is originally from the Philippines and came to the United States in 1993. Fideliz received her